What can you tell us about your new release, Numbered?

Numbered is a dystopian romance that takes place in the year 2050. Technology has advanced so much that people now know the date and cause of their natural death. As you can imagine, knowing exactly how long you have to live will affect the way you live. But the biggest change is that in the last 100 days of life, people give up their jobs, their homes, and everything in their life, say goodbye to their families, and then enter a spa-like facility where everything is taken care of for them, spending the last three months of their life in complete comfort with no worries at all.

Noelle and Ryder move into one of these facilities on the same day. Because of their shortened lifespan, both have spent a lifetime avoiding relationships and connections. With only three months left to live, they don’t have time to fall in love, but they can’t deny the magnetic pull they feel toward each other.

And then they uncover a secret about the numbers. Everything safe becomes lethal, and the only people they can trust is each other. Noelle and Ryder find themselves in a fight for their lives, as well as a fight to save the rest of the world.

I’ve been a writer as long as I’ve known how. But before writing, I was a reader. I think what inspired me to want to write stories were the stories I was reading. I’ve always had my nose in a book, so storytelling became a natural passion. I started out making up bedtime stories for my sisters. Then I started writing stories as gifts for my family. I dreamed of writing a book one day, believing it to be a huge, hard to accomplish feat. When I finally did, it was awful, but it also showed me that I could write a book. That terrible book (that I never published) paved the way for future books that weren’t terrible, and led to becoming a published author.

Only 5??? This list changes all the time because I have so many favorites, but at this moment, I’d consider these my favorites:

Jacob Have I Loved, by Katherine Paterson

The Alchemist, by Paulo Coelho

The Overstory, by Richard Powers

The Lovely Bones, by Alice Sebold

I would really love to talk with Katherine Paterson. Her books (She’s probably most known for Bridge to Terabithia) are full of well-rounded characters with real world problems. I feel like she gives a voice to grief or hardship, and then shows a way to keep living, even with this really hard thing the character is going through. Like in Jacob Have I Loved, she illustrates exactly what it feels like for someone to grow up feeling on the outside of everything, especially in one’s own family, and how it feels to live in the shadows of a sibling everyone loves. I resonated so much with this that I’ve cried buckets reading this book. So if I had her on my literary talk show, I’d ask about how she develops her characters, if they’re based on real people, and what kind of prewriting she does about her characters before she starts writing the story (or even while she’s writing it).

I love how I can lose myself in the story. While writing, that’s my reality. Even when I’m not writing, the characters stay with me. I could be driving down the road, and I’ll feel their presence, think about their circumstance, and so on. It’s kind of relieving to immerse myself in the story because sometimes the world doesn’t feel very fun.

Well, I have a day job, so that takes up most of my Monday – Friday. But I wake up extra early so that I have time to journal and read before work. I will often work on my manuscript during my lunch hour, sitting in a nearby park if the weather is nice. After work I’ll go to the gym, then eat dinner. Then I’ll spend another hour or so on my writing, if I have the energy. It’s hard to have a lot of time to write during the week, so weekends are when I get the most writing in. On those days, my favorite thing to do is grab my laptop and hole up in a coffeeshop for a few hours, sucking down caffeine while working on my novel.

What scene in Numbered was your favorite to write?

I loved writing the scenes where Noelle is a pretty awesome badass. Her father was a Navy Seal and trained Noelle and her brother throughout their childhood. So when society implodes and Noelle and Ryder become part of a rebel team, Noelle steps up to the plate with her training. It was really fun to write the fight scenes and show her fighting skills.

Everyone has their own story. I think this is something we all need to remember, especially in this divisive time. It doesn’t mean we have to agree with people who have differing points of views, but we would all do better as a society if we could aim to understand the reasons someone has for believing or acting a certain way. If more people approached others with curiosity instead of condemnation, I think this world could be a better place. Not a perfect place, but it’s a start.

Crissi Langwell is the author of the new book Numbered. 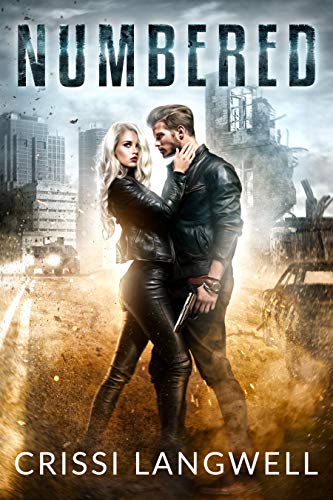 Interview with the Authors of Leave Me Breathless: The Black Rose Collection

Interview with M Gustafsson, Author of The Asset

Interview with Leah Reise, Author of The Beauty in Darkness: A New Race