Alice in Wonderland is near and dear to many reader’s hearts. A classic tale of adventure, magic, and madness, the original story has seen a resurgence in popularity in recent years, ever since Tim Burton’s twisted movie edition hit screens big as small in 2010. Keep reading for some of our favorite trips into Wonderland. 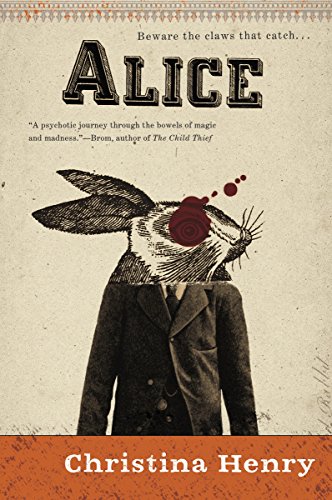 Brand new this week (Penguin: August 4th, 2015), Alice by Christina Henry is a whirlwind tale of dark fantasy featuring all of the main characters from Wonderland… with a twist. In Alice readers follow Alice, once a good girl from the pristine New City, as she breaks out of an insane asylum in the lawless Old City and hunts down the Jabberwock. A tale overflowing with corruption, violence, and, of course, magic, Alice crafts a Wonderland for adult audiences that is even more mind-bending than the original. In Splintered by A.G. Howard Alyssa Gardner, the descendent of the original Alice, must venture back into Wonderland, a place more dark and terrifying than Lewis Carol every portrayed, in order to save her family. If you enjoys watching your Wonderlands as much as you enjoy reading them, don’t forgetto watch Malice in Wonderland (Film: Released 2009), a modern day remake of the classic tale, following Alice, an American Law student studying in London, who gets hit by a car, only to awake with amnesia in Wonderland. Follow this adult Alice as she works to remember who she is and how to get home.