If you love Nicholas Eames’s rich, thrilling, and mind-bending creations as much as we do, you’ll find these new science fiction and fantasy releases just as exciting! Check them out! Fans of ACOTAR, From Blood and Ash, and Shadow and Bone will relish this new adult multi-realm fantasy full of vampires, dragons, fae, angels, and elementals by International Bestselling Author Stacy Von Haegert. The Prophecy of the Heron (The AI Dystopia)

Freedom is dead and the artificial intelligences (AIs) are watching Kim’s every move, enforcing the will of their dark masters. What happened in the AI War? Will she ever rejoin Shan? Join Kim on her epic journey from the slums of District 33 to the lair of The Director. Beware: there are fates worse than death for those who meddle with the AIs. A homeless prince, a grueling mission, an unlikely hope. When tragedy drives Jack far from home and into assassin training, he’s haunted with one desire: vengeance. He finds a new family in the desert but soon allegiances shatter. Hope sparks when Jack chances upon a familiar slave girl. Could his nightmares fade into a new dream? Norah Wintry is a Witch with a dream job. A Hollywood agent getting magical actors’ parts in blockbuster films. It’s a niche field with unique problems. Somebody gets shrunk down to toadstool size and suddenly everyone’s upset. Welcome to L.A. No worries. Norah will fix it. She has a great family, a crackerjack assistant, and her business is taking off. Until things start going wrong… Skylenna’s world stops revolving around Dessin as she learns of a new secret he’s been hiding. Plagued with betrayal, anger, and paralyzing waves of confusion, Skylenna must put her feelings aside and focus on saving DaiSzek from the Vexamen Breed. But after tragedy strikes, she embarks on a journey alone to learn the dark, epic secrets of her past. The lost memories of her childhood. The missing pieces of Dessin’s grand plan… 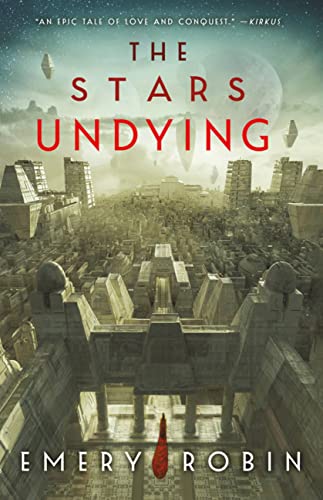 A sweeping tale of empire and betrayal set among the stars, perfect for readers of Ann Leckie and Arkady Martine, The Stars Undying is a queer, spectacular space opera debut inspired by the rise and fall of ancient Rome and Egypt—and the lives and loves of Cleopatra and Julius Caesar.