Interview with Tom Liggett, Author of Mozart in the Garden

What can you tell us about your new release, Mozart in the Garden?

Thousands of cookie-cutter homes for high-tech workers rose from the ashes of fruit trees that were bulldozed and burned in what is today’s Silicon Valley. I grew up there, unwanted, neglected—to a promiscuous mother and abusive stepfather.

This is a coming-of-age story about how I survived by doing odd jobs and how serendipity led me to the door of a woman who was a key figure in history: a survivor of the Galveston hurricane (1900) and of the San Francisco earthquake (1906), and who married an architectural icon in early California history, the masterful Carl Wolfe who revived Spanish-style homes in the region. Faye Wolfe had been a prostitute, unwanted, neglected, abused—like me.

Another story-within-a-story also recounts my apprenticeship of sorts with Max Gosseling, a photographer of midcentury California, who produced iconic postcards of the era and how he taught me the fine art of printing with him as a printer’s devil in a cramped, putrid mobile home.

When I worked as a printer’s devil, setting words one letter at a time, I discovered the precise order of words. Printers, as I learned from Max Gosseling, think paper is a holy object. To leave a smudge on a piece of paper is a profane act. We always washed our hands before printing and after setting the type.

I have been writing since I was sixteen years old and contributed sports stories for my high school newspaper. I am in love with the written word.

The Shipping News by Annie Proulx is my favorite book of all time.

In Basin and Range, John McPhee takes a dull subject (geology) and makes it read like a romance novel. It’s magic on paper.

Frank Herbert’s Dune was like a Dvořák symphony. Herbert wrote mediocre books and then composed this stupendous work of science fiction.

Because I am in love with words, Cormac McCarthy in All the Pretty Horses makes love to the English language, and sadly something bad has to happen to everybody. Perhaps I found that as a metaphor for my early years.

When I was thought to be developmentally disabled, as an eight-year-old, Bomba the Jungle Boy changed my world. Gave me validation that I was just smarter than everybody else. After that, I began to read the encyclopedia.

Brian Wilson of the Beach Boys is the most intelligent person I’ve ever heard speak on the radio. I may be witty, but he dwarfs my intellect. I want to know how he coped with seeing more of the world at a glance than most people saw in an entire lifetime. That’s the conundrum of a hyperintelligent person with massive sensory information flying his way.

Writing scratches a mental itch. Writing, for me, is visceral. Even a mundane email or Facebook post gives me solace.

Before I tackle the day’s work in my garden—a third of an acre that is the last working farm in downtown San Jose—I write something, whether for ten minutes or forty-five. I feed our animals and cook breakfast for my wife and wash the dishes.

I’m protective of my time in the garden, and I don’t like to be interrupted, so I’ll work at cultivating, planting, pruning, and harvesting as long as I can until I’m tired and can’t work any longer toward evening. I pride myself on my roses, long-stem cut flowers, carnations, melons, strawberries, Asian veggies, lettuce, and stone fruit trees. We grow massive quantities of food, and I give it away to food banks (the Japanese community adores my amazing daikon radishes).

What scene in Mozart in the Garden was your favorite to write?

After a few hours of cutting wood for Faye Wolfe’s ravenous stove to heat her home, or cleaning up the debris in her cactus garden, I would be exhausted and just wanted to get a cheeseburger with my pennies I earned doing her chores. But she would invite me into her historic home (the prototype for California Spanish revival), and we’d sit across from each other at the iron table on hard benches. I was drinking a tall ice water while her drink contained whiskey. Her stories during those precious hours turned out to be unbelievable, yet true. And retelling them for my readers was a privilege and an honor.

Fall down seven times, get up eight is credited to a Japanese author. It embodies my resilience as a child. I was the king of new starts. In childhood with so many moves and leaving gardens and friends, as a teenager changing schools and jobs, and as an adult who worked for the Surgeon General of the Air Force and Apple in its early days, to becoming a cook or doing other menial work, good and bad things always happened in my life.

Tom Liggett is the author of the new book Mozart in the Garden. 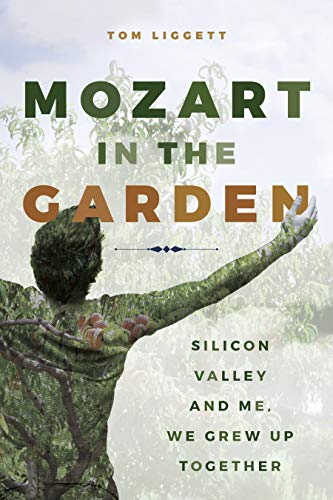