Tell us a little bit about your new release, Hostile Takeover.
Hostile Takeover is the 2nd book in my John Lago Intern-Assassin Thriller Series. It also serves as a sequel to the first book, Intern’s Handbook. So, it pays off on some setups from Intern’s but can also be enjoyed as a standalone novel. The narrative for Hostile Takeover was spun out of the romance between my main character, John Lago, and his nemesis slash lover, Alice. I like to think of it as an explosive love story, both literally and figuratively.

What’s on your writing desk?
My writing desk is a great representation of my split personality: Novelist and Video Producer. The novelist part of me keeps notebooks, outlines, reference books and other writing tools in a nicely chaotic pile. The video producer has a 4K workstation with big studio monitors and a massive Apple Cinema screen. Both parts of me enjoy the Mad Men bar tray (six different kinds of Tequila) and the Buddha head statue reminding me that I have already run out of time.

You used to work in marketing and called yourself a shameless product pusher (which is hilarious). What’s your favorite product for which you’ve ever worked on a campaign?
Great question! I have enjoyed most of the work I’ve done for my clients, like Levi’s and even Cisco Systems. However, the most fun I ever had in advertising and marketing was when I did copywriting work for Snapple. I wrote a lot of long copy for their website games, but the best thing was when I wrote “Quirky Copy” for them. That refers to the little sayings printed on the bottle labels. And I wrote a ton of them. Examples: Snapple Apple – they had a little arrow pointing at the apple image on the label and I wrote the line “Why bob?” – placed next to the label. Lemon Tea – arrow pointing at the sun image. My line: “Never sweats the small stuff.” Diet Peach Tea: “What the Fuzz?” Mango Madness: “A mango on a mission.” Fruit Punch: “Now you know what hit you.” Variety Pack: “Kitchen sink sold separately.” I loved it! Just sitting around writing a lot of fun and dumb sayings. The best part was being out somewhere and showing friends my handiwork on a Snapple bottle and having them say, “You get paid for that?”

Who or what inspired you to become an author?
It’s funny. I always wanted to be an author when I was a kid because I idolized Kurt Vonnegut and Ernest Hemingway. I got into movies after college because everyone around me – family, friends, counselors, etc.- had convinced me I couldn’t make a living as an author. So, I figured I would write for the movies and get the best of both worlds. But, the movies nearly drove me to madness and I came crawling back to books hoping they would save me as an artist. And they did.

Who was your childhood hero?
My childhood hero was The Six Million Dollar Man. For whatever reason – shrinks get your notebooks ready – when I was a kid I was kind of convinced I was part robot, like a very sophisticated robot made of tech that wasn’t yet recognizable as robotics. I know, right? Weirdo! Anyway, when that show came on TV, I immediately related to Steve Austin. First off, Lee Majors defined cool back then. Second, he had the sophisticated robotics I mentioned previously. Finally, he had been damaged in order to become bionic. Maybe I felt damaged? Okay shrinks, we don’t need you. I just worked it out on my own!

Say you have an afternoon to yourself, and you can pick any place to be and any activity. Where would you go and what would you do?
I assume by saying “an afternoon to yourself,” you mean I am literally by myself. Normally, when I have free time, which is rare, I spend it with my family so they don’t forget what I look like. However, if this is an occasion wherein they are off doing something else and I am alone, then I know EXACTLY what I would do. I would burn a J and go surfing. Preferably, I am surfing at either C Street in Ventura or San Onofre in North San Diego County. I am a longboarder and both of those places produce big fat steam engine rollers you can ride FOREVER and if you wipe out they don’t rub your face in the sand. After surfing, I would have a few beers with my LA surfing buddies (RIP Jeff) and then go to the movies. Then sushi.

What’s your favorite line from Hostile Takeover?
Lines are like children, so you can’t really choose a favorite, but the following line comes to mind because it elegantly sets the table for the book: “I guess the best place to begin is with Alice—the beautiful and charming love of my life who deceived me in every conceivable way, beat me senseless, shot me, ripped my heart out and stomped it to bits, and burned everything important to me to the ground.” And then a few sentences later, “…she’s just like me—a killer who thought she was heartless but found out the hard way she wasn’t when Cupid, that fat cheeky bastard, shot a 600 grain carbon fiber arrow with a bone-splitting broadhead right through her love muscle, and life as she knew it bled out onto the floor.” I know that’s more than one line but those are fraternal twins and hate to be separated.

Google is failing me – what is the Bull Durham strike zone that you refer to on your website? (This is especially embarrassing because our office is a block from the Durham Bulls stadium)
The character of Ebby Calvin ‘Nuke’ LaLoosh, played by Tim Robbins, is an inexperienced pitcher assigned to work with old hand minor league catcher Crash Davis, played by Kevin Costner. LaLoosh looked a lot like me when I pitched in college, tall and gangly. Like LaLoosh, I could throw “gas” – meaning I was a fastball pitcher who could bring the heat. However, also like Nuke, I had no control. When I was on, I was on, but when I was off, I was hitting batters and throwing balls into the bleachers. So, the lack of control – which is the absolute key to being a major league pitcher – is what I’m referring to when I say “Bull Durham Strike Zone.”

Do you have a quote or philosophy that you live by?
It may not look like it from outward appearances, but I have had a difficult life. Both of my dear sisters passed away at young ages from a rare heart condition and my father died at 57 from cancer. How’s that for a rapid descent into darkness? Anyway, my father used to say, “When the going gets tough, the tough get going.” I live by that because life brings challenges every damn day and I try to face them head on, being decisive, and bee lining for solutions. Hostile Takeover was a very difficult edit. My dad’s mantra really helped me to avoid sitting around whining about it and firmly place my nose on the grindstone. Without that, I don’t know how I would have made it through.

Shane Kuhn is the author of the new book Hostile Takeover. 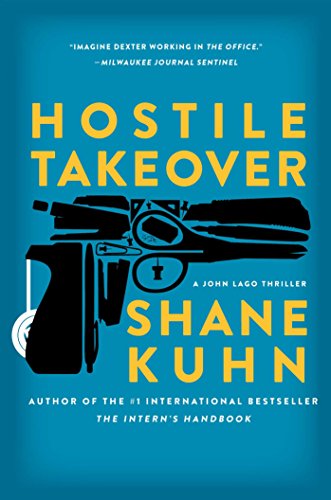 Books To Read If You Like Historical Fiction | February 2020