Interview with Robert Evert, Author of Sword of Betrayal

First of all, thank you very much for having me here. I really enjoy NewInBooks. It makes finding a good book easy!

What can you tell us about your new release, Sword of Betrayal?

Sword of Betrayal is an epic fantasy about a teenager who is caught between his own desires and the expectations of his overbearing father. (“Edris wants to be a poet. His father wants him to kill the king’s son.”)

It was inspired by a conversation I had with a high school football player (American football, not soccer). He was this colossus of a kid—probably six-foot, five inches tall, two-hundred and fifty pounds of solid muscles. He’s an extremely good player and has dozens of universities trying to recruit him.

His father wants him to be a professional athlete and keeps pushing him to be better and better (“…be the best or else!”). The kid, however, doesn’t know what he wants to do with his life. He doesn’t even like football! The only reason he plays is to please his father.

When I spoke with him, there was this pain and desperation in his eyes that haunted me. I figure there are too many young people like him, so I wrote a character based upon what they are going through. I hope I did their struggles justice!

I’ve always been a writer. Even in fourth grade, I had this class newspaper (the Evert Times!) where I reported on who won the kickball during recess, how bad the lunch was that day (Once, I found these little black beetles in the mashed potatoes and broke the story!), and so forth.

I also wrote these weird stories like “Buck Evert” (a rip off of “Buck Rogers”) and this 1950’s style private-eye named “James Rich.” I liked writing about him because I could use the word “dick” and not be punished! (In the 1950’s, the word “dick” often meant “private detective.”)

But it wasn’t until the summer of my sixth-grade year when I actually thought about being an author. I read The Hobbit and The Lord of the Rings and was swept away. I haven’t left Middle-Earth since.

So, to answer your question, Tolkien inspired me to be an author. But it wasn’t until I read Stephen King’s On Writing that the dream became a reality.

Oh, boy! That’s a difficult one. Let me think…

I’ll give you the top five that influenced me the most…the ones I obsessed over.

1. The Mouse and the Motorcycle by Beverly Cleary. Man, I loved that book! I read it over and over. I even bought a little plastic motorcycle for my gerbils, but they never even tried to ride it—the ungrateful bastards!

2. The Hobbit and Lord of the Rings by J.R.R. Tolkien. What can I say? It’s like my first love. I can’t forget the feeling of walking with the hobbits through the Shire, or going through the blackness of Mirkwood, or riding in the green fields of Rohan. It’s magical.

3. Salem’s Lot by Stephen King. I’m not sure what it is about Stephen King’s writing. It isn’t as real as Tolkien’s, but he certainly knows how to scare the crap out of me. I loved The Shining, but I could never finish it. It just creeped me out—Redrum! Redrum!!

4. The Harry Potter Series by J.K. Rowlings. The nice thing about Harry Potter is you can argue about it. A friend of mine insists Harry was a spoiled brat and that Hermione was the real hero. Is he right? Who’s to say?

5. The White Fortress by Neal Bascomb. This is actually non-fiction. It’s about the Norwegian heavy water plant the Nazis were using to help build an atomic bomb. It’s incredibly gripping, especially how these little-known heroes saved the world. Of course, I’m also Norwegian, so it moves me on that level as well.

Living guest…Stephen King. I think I have a lot to learn from him. Not only with regard to writing and inflicting emotions on the reader, but also about life and balance and how to pick yourself up after nearly being killed by a truck. He’s learned a lot of lessons the hard way!

Any guest… Tolkien! I would love to talk to him about his writing process and whether he ever felt self-doubt. Did he ever sit in his office, writing away, and think to himself, “Oh, god! This is crap! I’m a worthless hack who will never get published!”?

I think that’s the most difficult part of being a writer—the self-doubt that constantly gnaws at your soul. I’d love to hear how Tolkien dealt with it (if he did).

There’s this point where you’re typing away (tip-tap…tip-tip…tap) and something happens. The characters come alive and start showing you what to put down on paper. It’s not coming from you, the writer. It’s coming from someplace else, like a ghost or spirit guide or something primeval.

You’re sitting there, watching things unfold on the screen in front of you and you’re thinking, “Holy crap! Where’s this coming from? Where’s it going?” You hear the characters talking and see the scenes in your head.

Crap!! Maybe I’m crazy! Seriously, does anybody else experience this? Do I need help?

I get up when it’s still dark and drive my teenage kids to school. I go to work and attempt to teach a bunch of college students who have no interest in anything I have to say. I then go to faculty meetings that have nothing to do with anything (and attempt to reason with administrators who have no interest in anything I have to say). At 2:30 pm, I go to the high school and pick up my boys, then drive them to their various practices. I then wait around for them to finish as I slowly grow older—my life force slipping out of my pale, wrinkled body. I get them home and pray the dogs haven’t peed on the rug. We eat a late dinner while my sons stare mindlessly at their phones and answer my many questions with one-word answers. Finally, I go to bed exhausted, hoping giant, super-intelligent squirrels will take over the planet.

On a good day, the dogs pee outside (and I’m able to write a bit).

What scene in Sword of Betrayal was your favorite to write?

There is a scene where my main character (Edris) is sitting half-naked on the edge of his lover’s bed. He’d been physically beaten and humiliated and he’s unable to “perform.” He’s worried that something is wrong, that the beating took away his manhood and that he’ll never get it back. His lover (Beatrice) tells him that making love isn’t a physical act, but a mental one. She then lays back in the bed and asks for him to read some of his poetry.

I thought it was a rather important scene, not only for the story and showing that Edris is an extremely sensitive and vulnerable guy; but also for any readers (especially males) who confuse sex and love. It was also one of those scenes that the characters wrote for me (like I was talking about above). It just happened. I had no idea where it was going. I had no idea about its significance. And when I re-read it, I felt genuinely touched.

I try to live by something Jimmy Steward’s character (Elwood P.Dowd) says in Harvey.

He says, “Years ago my mother used to say to me, she’d say, ‘In this world Elwood you must be oh so smart or oh so pleasant.’ Well, for years I was smart. I recommend pleasant. You may quote me.”

What a wonderful thought. I don’t know how smart I’ve ever been. But I’d like to be more pleasant.

Robert Evert is the author of the new book Sword of Betrayal. 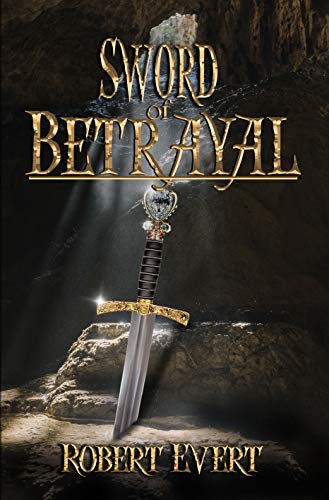