What can you tell us about your new release, Amare: Bloodlines?

Amare: Bloodlines is the sequel to Amare: Bloodstreams. They are fantasy novels set in our world and about a man called Amias who discovers that he has superhuman abilities. He’s part of a secret race of people called the Altéré who all share his abilities but to differing degrees. Altéré boys and girls are identified at a young age by elders and then trained to use the abilities to protect the secret of their existence, and humankind.

In Amare: Bloodlines, Amias has been identified as possibly being the most powerful of the Altéré. His people are looking for him to lead them against an ominous threat from Kaden, a man who is obsessed with eradicating any challenge to his growing power. Amias is on the brink of a war he never wanted to be a part of, and must decide whether to accept his destiny, or refuse the hopes of his people.

This series of novels are books that I would have enjoyed reading when I was younger, but also now. I wanted to create a gritty world and incorporate action and fantasy and detailed fight sequences.

I’ve always loved to write and tell stories, even as a child, and I’ve always had lots of ideas for novels and short stories that I used to note down. Then, my eldest daughter Emilie took an interest in reading and I thought I’d like to write a story that she would be interested in, and also that I would have liked at her age. She inspired me to start writing.

My top 5 books I’ve read are Lord Of The Rings, The Count Of Monte Cristo, Dune, A Dance With Dragons (it was difficult to choose just one of the Song Of Ice And Fire series), and The Hound of The Baskervilles. In this order.

Lord Of The Rings is my favourite ever book and has so many amazing qualities,I don’t feel that any book compares to the characters Tolkien created. Almost all of the main protagonists are so much more than they first appear to be, and have hidden strength. It’s the only book I’ve finished, and then picked it up and read it again. It’s that much of a journey from start to finish.

I loved the Roald Dahl books as a child, and when I’ve read them to my children I appreciate them even more. The mix of imagination and humour he brings to his books is so special. He wrote books for adult and children, and lived a really fascinating life.

I’d love to interview Roald Dahl and ask him which one of his childrens books was his favourite. Mine is Fantastic Mr Fox.

I’ve found it such an emotional journey that you can become so engrossed in. I’m a big planner, but it’s not necessarily the part of writing I enjoy. Developing the story as you write is truly an amazing thing and then both times I finished my novels I felt very emotional, in a really uplifting way.

I also love getting a review from someone in a different part of the world who has enjoyed my book. That gives me the greatest satisfaction.

A typical day for me is a pretty busy one. I get up early and get my children ready for school and nursery. I then go to work and after I’ve finished pick my children up. Once we’re home we have dinner as a family and then the kids go to bed. I then make a coffee, put my headphones on with a chosen playlist and write.

It’s pretty hectic but I love spending time with my family whenever possible, and writing, so I make sure I try and do both.

What scene in Amare: Bloodlines was your favorite to write?

As I’ve mentioned, when writing both books I found that as I neared the end of them I became really emotional. I feel it’s hard not to become emotionally involved in your protagonists journey, and bringing the novels to a close, whether it’s a definitive ending or not, is extremely satisfying.

My favourite parts to write were the final four chapters of Amare: Bloodlines. When I finished them I felt really happy with the ending I’d achieved, it was just how I wanted it to be and had envisioned

I have a large family, and before I started writing my first novel I wasn’t sure I should assign the time to it. My wife encouraged me and told me it’s never a waste of time doing something you love. I think this is very true, and it helped me to really believe in what I was undertaking and to start writing.

J Gaines is the author of the new book Amare: Bloodlines 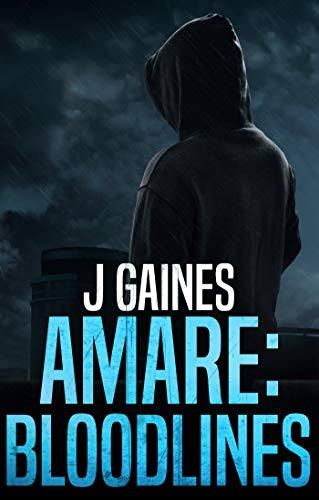