Interview with D. D. Shay, Author of The Ascendants

What can you tell us about your new release, The Ascendants?

The Ascendants takes place in the mythical land of Lithandys, which was once ruled with benevolence by a beloved king and queen, but is now ruled by a cold and ruthless usurper, the Lady Keres. The story follows the descendants of the king and queen as they unite to reclaim their throne from Keres and restore the magic that she has nearly eradicated. It’s a classic good vs. evil story with lots of magic thrown in and (I hope) engaging, relatable characters.

I’ve wanted to write a fantasy novel for as long as I can remember. When I was a young child, I used to walk to the little library down the road and squat there for as long as the old librarian would allow. (I think she thought little kids should be outside playing and not inside reading because she never let me stay very long.) As a teen I was reading Poe, Bradbury, Asimov and Lovecraft. Anything escapist and fantastic. As an adult, I continued to consume fantasy and science fiction (and some horror) and made a few attempts at putting words together myself. But I had children to raise and bosses to defer to, so a novel just never happened. I guess now is my time. Better late than never, eh?

Top 5 is tough because there are so many. That said, in no particular order:

‎Stephen R. Donaldson, Chronicles of Thomas Covenant. Okay, that’s more than one, but if you lump them together it’s one story, so…
Tad Williams, Tailchaser’s Song. A beautiful fantasy, unlike anything else I’d read to that point (and pretty much since).
Robin Hobb, all books in the Realm of the Elderlings series. Again, more than one but a cumulative story.
Brian Froud, Fairies. Not a novel (more of a reference, really), but I’ve read it a gazillion times since it was first published (1978) and it still fascinates me today.
Stephen King, The Stand. A damned fine tale of good vs. evil.

My first guest would probably be Robin Hobb. I’d love to ask how she came up with some of her concepts. For example, the dragon life cycle and the live ships. She has an awesome imagination and I’m wondering if it’s as arduous for her as it is for me. Joking. I’m just super jealous.

My favorite thing about writing is putting it down for a while and then returning to it later. Sometimes I think, OMG what the hell was I thinking? That sucks! However, there are other times, when the writing is good, instead of feeling compelled to tear it apart and rework it, I get swept up by the words and carried away to another place or time or world. And I realize that I wrote something well. Really well. That’s the best feeling in the world.

My typical day consists of getting up before the birds and beating the commuter traffic to work. You see, I still have bills to pay and cats to buy kibble for. I’m a technical writer by trade, so I get to be creative, but it would be really cool to write what I want, when I want, instead of busting my hump on something that people never really read, except out of desperation. After work, I head home and try to spend an hour or two on the sequel I’m currently writing. Then I wind down with computer games or the latest Netflix series. Then I get up the next day and do it all over again. So please, dear readers, buy my first book and rescue me!

What scene in The Ascendants was your favorite to write?

I had the most fun writing scenes where characters antagonize each other (most notably a pair of viceroys who are constantly trading barbs) and any scenes where animals or non-human creatures were prominent. Lithandys exists on a (possible) future Earth and is populated with all manner of creatures, real and fantastic. And since I happen to adore fairies and other fae creatures, I had to include them too.

I’d have to say that my life’s philosophy is simply, “don’t be an asshole.” Treat people the way you want to be treated. You only get one life and it’s shorter than you might think. Don’t waste that precious time on animosity or bigotry or being judgmental. Create and love and for God sake, laugh, especially at yourself. 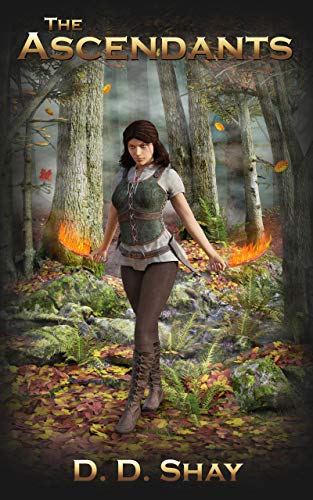 D. D. Shay is the author of the new book The Ascendants.