Interview with Avanti Centrae, Author of VanOps: The Lost Power

What can you tell us about your new release, VanOps: The Lost Power?

It’s a DA VINCI CODE meets TOMB RAIDER type award-winning thriller, and an instant international bestseller! Readers are really responding to the action-packed mix of intrigue, history, science and mystery. The story begins with a double homicide on a foggy morning in the Napa Valley and accelerates from there.

When I was young, I didn’t always feel like I fit in, and had an overwhelming mix of emotions that I didn’t know how to handle. Books were my best friends, and authors my heroes. I’ve always wanted to write to keep other readers company during the dark nights and lonely days. Adventure is my favorite activity, and has inspired my novels.

I’ve listened to the entire WHEEL OF TIME series at least three times, so it’s right up there. Other favorites include James Rollins’ MAP OF BONES, and Steve Berry’s THE ROMANOV PROPHECY. Carlos Ruiz Zafron did an amazing job with the CEMETARY OF FORGOTTEN BOOKS series, and I recently discovered ORPHAN X by Gregg Hurwitz. All very well done.

James Patterson is the most successful author of our time. I’d love to learn his secrets to sniffing out successful story lines, and talk with him about his marketing techniques.

While outlining, I love to design surprising plot twists. Pulling all the threads of a story together can be like solving a Rubik’s cube, and that’s a lot of fun for me.

It depends on where the book is in its lifecycle. Right now, with the release of THE LOST POWER, I’m spending a lot of my time enjoying interviews like this one, as well as polishing book two and designing book three. When I’m done outlining a work and am in the middle of writing it, I’ll spend the day editing the prior day’s work, researching and writing the next chapter. When I need a break from the desk, I throw the ball for my German Shepherd puppy in the big back yard.

What scene in VanOps: The Lost Power was your favorite to write?

There’s an argument just over half way through the book between Maddy Marshall, a tall dark-haired app designer and aikido instructor, and Bear Thorenson, a broad-shouldered marine who has been harboring feelings for Maddy and a secret alliance with VanOps. In that scene, Bear reveals he’s working with VanOps and Maddy is quite angry about it, which sets up a dramatic fight between the two of them. Also, Tim Campbell, the audio book narrator, did a fantastic job capturing their pent up emotions.

There’s a refrain in THE LOST POWER that mirrors a practical tool that I use in my life: Listen and Feel The Power. In the story, Maddy is a martial arts black belt who has never felt her own life force, or ki, energy. She has to learn to feel her energy, and she does that by first listening. Really stopping to listen to others, to hear the birds, to hear the pulse of life in your veins, brings with it a host of advantages, including giving Maddy an edge over her opponents. It’s something we can all learn from her.

Avanti Centrae is the author of the new book VanOps: The Lost Power. 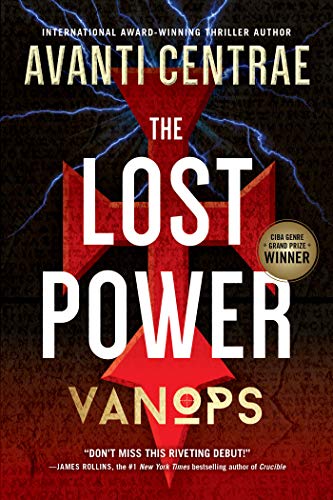 Interview with Cece Whittaker, Author of Angels in the Rough