Gifts for History Buffs: US History Books To Gift in 2015

One great thing about history buffs? They’re easy to buy gifts for. History gifts run the gamut of presents, from artifacts to tomes. We think books are great gifts for history buffs, since to love history is to love information. We pulled together some of the best new US History books from Fall 2015 – all of them make great gifts for history lovers, and they’re brand new. We pulled nonfiction for this set of recommendations, but you can check out our historical fiction picks here.

Gifts for History Buffs: US History Books To Gift in 2015 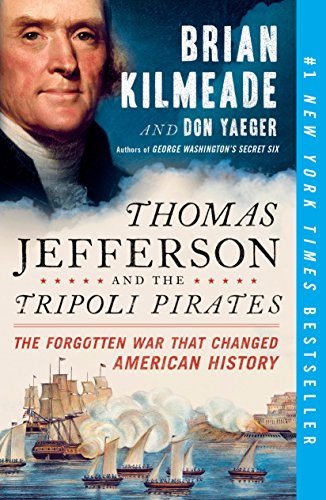 Thomas Jefferson and the Tripoli Pirates: The Forgotten War That Changed American History

Thomas Jefferson and the Tripoli Pirates reads like an edge-of-your-seat thriller, but is the true story of a little-known war. Thomas Jefferson’s presidency began in 1801 amidst turmoil in the Barbary states. American soldiers were being captured in the North African seas and being help for ransom at exhorbitant costs.

Buy it for: the history buff whose bookshelves are filled with Vince Flynn and Brad Thor. The Devil’s Chessboard: Allen Dulles, the CIA, and the Rise of America’s Secret Government

Allen Dulles was the longest-standing director of the CIA. He is painted with espionage, conspiracy, and corruption in The Devil’s Chessboard. This new release is highly critical of Dulles and the CIA’s rise as a powerful agency in the United States in the 20th century.

Buy it for: the modern history buff and national security critic. Lafayette in the Somewhat United States

The Marquis de Lafayette was George Washington’s highly-decorated general. Sarah Vowell tackles the dense topic of a general in the Revolutionary War with humor and irreverence in Lafayette in the Somewhat United States, a must-read for fans of war stories.

Buy it for: the Revolutionary War history buff. War of Two: Alexander Hamilton, Aaron Burr, and the Duel that Stunned the Nation

Alexander Hamilton’s infamous duel is stuff of legend. John Sedgwick brings the true story to life in War of Two, digging into the motives and rivalry of Aaron Burr and Alexander Hamilton. It’s a compelling tale of competition and a feud that lasted decades.

Buy it for: the founding father enthusiast. Humans of New York blends modern history and modern anthropology in a beautiful and compelling book. Photographer Brandon Stanton tells the stories of real people in New York, touching on every major issue that has shaped America in the past several decades. Note: we recommend the hardcover – this book is full of pictures!

Buy it for: the person who loves to hear the stories of others.