The month of January has brought us some fantastic fantasy and sci-fi books and we couldn’t help but share some of our favorite new releases. Check out the latest from bestselling authors Mark Wells, E.A. Chance, Rory Surtain, Jule Owen, Victoria Saccenti, and Dianne Duvall. Enjoy your new books! The second book in the Cambridge Gothic Series by Mark Wells… A mystic portal lies open. A chilling predator stalks the night. Can an undaunted student stop the darkness from spreading? Giles Chamberlain is determined to prove himself to his girlfriend’s family, so sets out to discover what became of her missing brother. But when he encounters a sinister figure prowling the college’s rooftops, he suspects last semester’s creature was not the only entity to cross into our world. The second book in the Shattered Sunlight Series by bestselling author E.A. Chance… In the aftermath of a deadly global solar flare, Dr. Riley Poole embarks on a treacherous journey to learn the fate of her two youngest children. After making the heart-wrenching choice to leave her injured teenage daughter, Julia, in the hands of her aunt and uncle, Riley and her new husband, Coop, strike out into the wilderness toward Colorado. The third book in the Demon in Exile Series by Rory Surtain…Sometimes, everything goes according to plan. I dread those moments. Colivar is a Kingdom plagued by seemingly random incursions from the Infernal Domain. For centuries, the Order of the Vigil has fought to stem the tide and preserve the Realm, but politics and uncivil wars have depleted their ranks. For reasons unknown, the High Prince of Hell has decided to lend them a hand in the form of a demon in exile. The second book in The Recoverist Quartet by Jule Owen… At the end of the twenty-fifth century, two young women in search of their history, uncover dangerous secrets and create some of their own. Elidir can not be found on any official map. A dome protects its citizens from raging storms and deadly heat, while high walls protect them from the desert people known as Non-Grata. In this secret city, deep beneath a mountain, lie the remains of Western civilization. 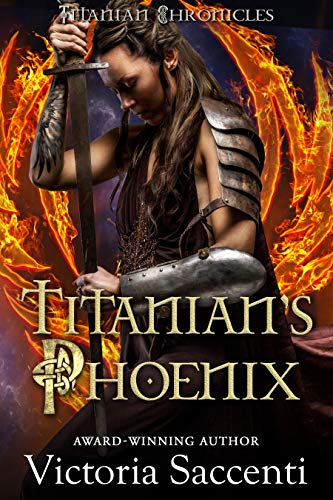 The first book in the Titanian Chronicles by Victoria Saccenti… Maya Brown doesn’t believe in magic—until she was kidnapped along with her eccentric godmother, Anna. By elves. After she is freed by a strange power, Maya follows Anna’s plea to seek out a man named Soren at a magical bar. Maya doesn’t believe in love at first sight, either, but when she encounters seven-plus feet of muscle and mood-changing eyes, her body does a full-on reset. The second book in the Aldebarian Alliance by New York Times Bestselling Author Dianne Duvall… Eliana has never had an ordinary life. Well, it hasn’t been ordinary for a long time. As a powerful Immortal Guardian, she spends her nights hunting and slaying psychotic vampires that most of humanity doesn’t even realize exist. Then she is presented with an opportunity to instantly make her existence seem downright boring. The leader of the Immortal Guardians asks her to guard a group of mortals who are embarking upon a voyage across the galaxy to the planet Lasara. How could she possibly say no?